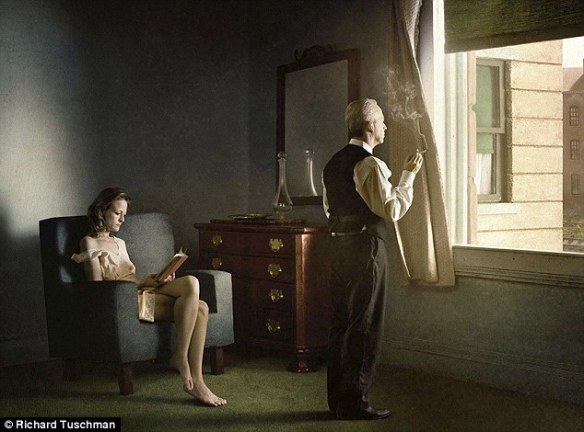 In casting around for photographers who have generated work that resembles that of Edward Hopper I came across the work of Richard Tuschman. In his series ‘Hopper Meditations’ Tuschman attempts to replicate some of the work of Hopper, focusing on Hopper’s interior images. The image above is based on the image following: 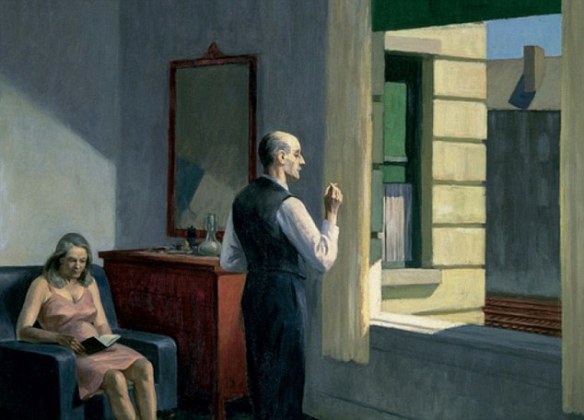 I think that he succeeded in not only replicating the original but also bringing something of his own to the image too.

In looking at the gallery of images on his website I couldn’t figure out how he was making these images – were these elaborate sets similar to those that we saw Gregory Crewdson prepare? Or something else? Take a look at the images and have a guess.

Once you’ve done that check out the videos below for the answer! This article also has a nice discussion of the technical aspects of ‘Hopper Mediations’.

Richard Tuschman on Montage from Seth Thompson on Vimeo.

Richard Tuschman on Hopper Meditations from photo-eye on Vimeo.

I had a chance to look at some of Edward Hopper’s paintings of scenes from small town America over the Christmas break and couldn’t help but be reminded of the work of Gregory Crewdson. Like Hopper’s paintings, Crewdson’s photography shows scenes from small town America. They are vignettes that raise questions, that invite you in to wonder what happened before and what will happen next.

Many people will talk about their photographs being ‘cinematic’ but Crewdson’s images could really be stills from a movie. The work that goes into setting up each of the shots is not far from what you might expect for a cinematic production. You get a glimpse behind the scenes in the videos below. The second video is a trailer for the documentary ‘Brief Encounters‘ filmed over a 10 year period it gives not only an in depth look at what goes into the making of the work but also a sense of the events and experiences that shaped Crewdson the man.