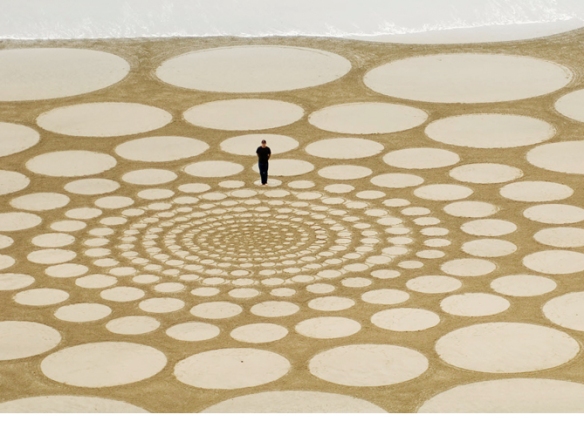 Jim Denevan is a chef and an artist. As a chef he is the founder and driving force behind the ‘Outstanding in the Field‘ farm dinners. The aim for the meals is to reconnect the diner to the land, to showcase the talents of the farmers who grow the food and the chefs who prepare it. Here’s a link to the companion book. They were in Boston this week visiting Island Creek Oysters but unfortunately I missed them!

As an artist Denevan creates some of the largest drawings on the planet. Working most often with sand on California beaches, but also in other parts of the world including Siberia (!), working quickly to beat the incoming tide he creates geometric patterns that because of their scale are best viewed from the air. Very impressive. Who ever said that crop circles couldn’t be man made has never seen a Denevan drawing. Check out some videos of Jim at work below.

I stumbled across Pentti Sammallahti’s photography again this week. Sammallahti, born in Finland in the 1950’s, has travelled widely as a photographer – Russia, Asia, Europe and Africa, including stops in Siberia, Japan, India, Nepal, Morocco, Turkey, Europe, Great Britain and South Africa. His photographs of the White Sea in Russia are regarded as his best work, with Sammallahti himself selecting the image above as his best photograph. He describes the making of this image here.

Photographs from both his native Scandinavia as well as from his travels can be found in the retrospective of his work ‘Here Far Away‘ and the book is reviewed by Sean O’Hagan in The Guardian here.

While Sammallahti’s sense of humor comes through in many of his photographs, I must admit that I enjoyed looking at his photographs of the ocean the most. One example is shown below.