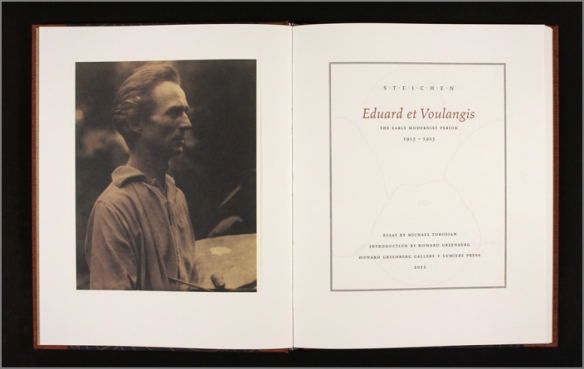 Lumiere Press are celebrating their 25 th anniversary with the release of STEICHEN: Eduard et Voulangis . As I’m sure you’re all well aware Eduard Steichen was an American photographer, painter, and art gallery and museum curator. Amongst other things Steichen was the first fashion photographer and the curator responsible for the family of man exhibition at the MoMA: An exhibit of 508 photos by 273 photographers in 68 countries were selected from almost 2 million pictures submitted by famous and unknown photographers.

STEICHEN: Eduard et Voulangis focuses on the period of Steichen’s life just after the first world war when he spent time in his home village of Voulangis, just outside of Paris, experimenting and developing as an artist. The volume pairs a very early portfolio of the early modernist work of Eduard Steichen, with an essay from Michael Torosian that charts the path of Steichen’s early development as an artist, his ascent in the orbits of Paris and New York and the confluence of cultural, aesthetic and personal events that dramatically forged his work as a photographer. My copy arrived just before I headed off for a trip to Europe and I’m looking forward to chance to dig into when I return home.