I thought that focus and depth of field were pretty simple. For things where you want to blur the background, focus on the subject, use a low F number (f4 or lower) and you’re good. For flat planes or things that are far away, focus on the subject and use a mid F number (f8 ish). For the grand landscape shot where you want front to back in focus, focus a third of the way into the scene and use a high F number (f22 or above).

This is probably as much as you really need to know to make very good photographs. However, like many things that seem to be simple, if you want to pick away at this and go deeper you can.

In the case of depth of field the only thing that is in focus in your photograph is that which you focused on and everything else on that plane. The rest of the stuff in your photograph that you think is in focus is actually ‘acceptably’ out of focus. For medium and large format cameras, cameras that have ‘movements’, that allow you to tilt the plane of focus this means that you really can get front to back focus, this is an application of the Scheimpflug principle. Those of us using DLSRs are out of luck unless we have a tilt shift lens that will allow you to do the same thing.

So, how to get front to back focus? Easy, take multiple images with different focus points and then blend them together in Photoshop to get what you want to be in focus, in focus. For this kind of shot rather than set the lens to f22, I would recommend that the f stop you choose be the one at which the lens you’re using is optically the best. As a rule of thumb this is usually 2 stops away from wide open, so for an f4 lens this would be f8.

So you’ve taken your shots – in this example I was exploring rain drops on some maple leaves. The images were shot at f4 to blur the background. In one image I focused on the front set of leaves and in the second I focused on the back leaves. Click on the images to see them larger.

The first thing to do is to open the images in photoshop and load them into separate layers. Once you’ve done that you can then go to the edit menu and select auto-blend layers: 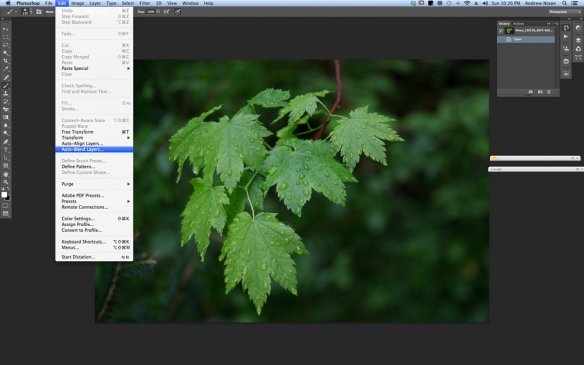 then stack images in the dialog box that appears next. 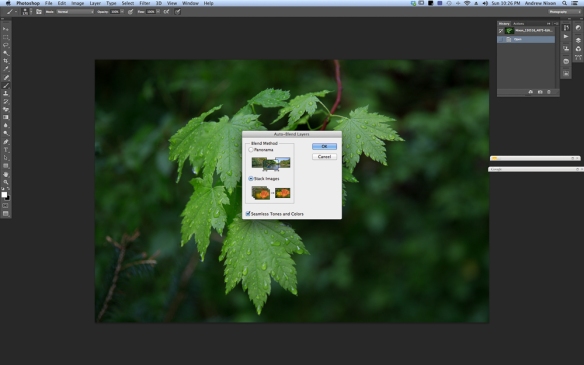 This gives the blended image with good depth of field from the front to back leaves.

A bit more photoshop to remove some of the distracting elements to give the final image. 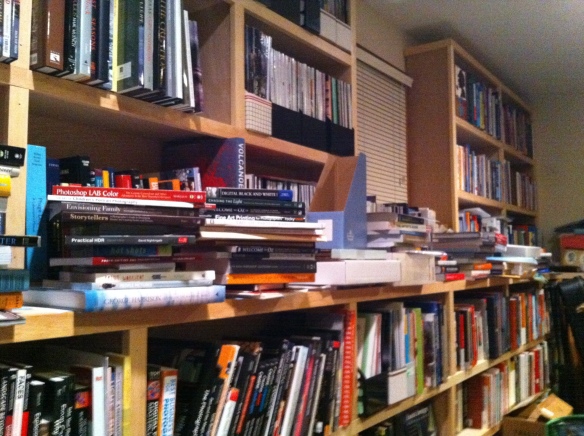 As you can probably tell from the photo above, my book collection is getting a little out of control. While I would have a hard time paring it down and parting with any of the books I thought that it would be a fun exercise to select 25 ‘how-to’ books to hang on to. I decided to select a set of ‘how-to’ style of books. Some a very practical nuts and bolts of how to use Lightroom or Photoshop, some point the way ‘how-to’ using examples from the authors, some feature exercises designed to help you find your way of capturing images, some ask more questions than they answer and finally some help with talking about your work and sharing it with the world. These are all books that I still find useful, although not necessarily ones that I would recommend to someone who’s just picked up a camera. I’m sure this would be different to your list and would be happy to hear what you would have included. A ‘top ten’ from my collection of art books, monographs etc. in the coming weeks.

Within the Frame
Visionmongers

The Moment it Clicks
Examples: The Making of 40 Photographs

Landscape Within
Landscape Beyond
Finding the Picture

I’m still futzing with making black and white photographs. The winter trees above taken during a rare (at least for this winter) snow flurry is my latest effort at black and white. A little easier to visualize this time since the subject is ostensibly black and white. Comments as always appreciated.

I’m not exactly comfortable with the try it and see approach, although that will surely work, and so I have been looking around for tools and resources that could help educate and train my eye. The book ‘Seeing in Black and White‘ by Alan Gilchrist seems like it would give a solid theoretical understanding and was recommended by Vincent Versace in his recent interview with Ibarionex Perello on The Candid Frame. I’m also looking forward to seeing Vincent Versace’s book on black and white conversion techniques, ‘From Oz to Kansas: Almost Every Black and White Technique Known to Man‘, which should appear in the next couple of months.

The tool that I’ve found that looks intriguing is the Tiffen #1 B&W Viewing filter, essentially a Kodak Wratten 90 monochromatic viewing Filter but in a more user friendly holder. Apparently it is able to remove the color and gives a monochromatic view more like that which would be captured by black and white film. Sounds intriguing and I can’t wait to give it a go. Read more about the filter in an excellent article by George DeWolfe here.

In his book ‘Welcome to Oz’ Vincent Versace says that practice doesn’t make perfect, it makes permanent! Perfect practice makes perfect. This should be familiar to anyone who’s learned how to play a musical instrument. Practice builds muscle memory that can be hard to unlearn once established.

I think that the same can be said for patterns of behaviors, the rhythms and routines of life. It’s certainly true for the way that I approach photography and change is hard to do.

The Maine Islands workshop that recently attended with John Paul Caponigro marks another step in my evolution as a photographer. I’ve heard many times before the importance of ‘working the scene’ and frankly thought that I was but now realize that I’m not working hard enough. The challenge that I’ve set myself is to go ahead and make the obvious image but then make something more creative and keep pushing until I have 6-10 distinct images. Easier said than done! Even though I set out with the intention of doing that what I ended up with was not too much of a departure from what I’d done before. Breaking old patterns of behavior is tough but certainly worth the effort.